Kate sent me the following e-mail this morning:

"This week Rayyan's science lesson was on plants, the experiment to put white carnations in water with food coloring. The local florist didn't have white carnations, but said that mums would be better and actually orchids the best (as if!). So I bought some mums (and he gave me a dyed orchid as a gift).
I remember trying something like this with celery as a younger person, but I don't recall it working terribly well. But maybe celery isn't as fun as flowers."
Here Rayyan, Bilal and Nusaiba make the dye containers into 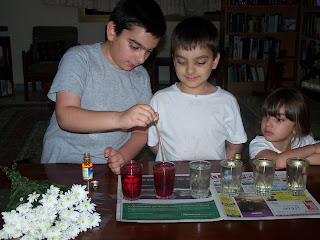 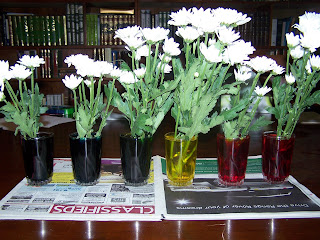 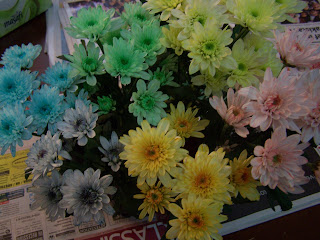 season title of the Big East Conference. On her right is her Aunt Cheri Hall and on her left is her mother, Kristi Sweeney. Hopefully her cheering can echo the success attained by her Aunt Laura who, as the Cardinal Bird, cheered the Cardinals to an NCAA national title in Indianapolis in 1986!
Posted by Hammer at 7:59 PM No comments:

Put Another Nickel In

Many, many years ago, when I was in my singles, on rainy days I would stack all of my sisters' 78 rpm records on the floor and listen to both sides of all of them over and over. My oldest sister, Doris, was 14 years older than me so the music was primarily from the late twenties, all of the thirties and the early forties. I listened to them so many times that I committed all of the lyrics to memory. This was the beginning of what has become a lifelong hobby of collecting popular music and learning lyrics.

On my first computer I attempted to catalog my music and record much of it on cassette tape. This at least enabled me to know if I had a particular song but fast forwarding or rewinding to find the song was something of a chore even if the tape itself could be located in the somewhat strange filing system I developed. Then came CDs which made the task of finding the song much easier. It still didn't help in locating the CD in my library. Ultimately Adam rescued me from this confusion by introducing me to iTunes.

Now I put my music on my computer hard drive and catalog it in iTunes. I have chosen Joel Whitburn as my catalog expert. I check each song that I add in his books on popular music to see if they "charted" and, if so, what year and how high. Thus iTunes allows me to find songs by title, artist, album, year on the chart, category etc. I can quickly find and play any song (e.g. the top hits of any particular year) on command. I have connected my computer to my stereo system and I can record from any media (33&1/3, 45 or 78 rpm records, cassette tape, 8 Track tape or even reel to reel.) Yes, I still have an 8 track player!

I have songs in my collection from every year in the twentieth century and can create at least one full CD with songs from almost every single year. Christmas music amounts to 4500 songs among the 65,000 total on my computer.

Every day I listen to a variety in various genres. I take the advice of Teresa Brewer and always "put another nickel in!"
Posted by Hammer at 3:09 PM 1 comment:

The constraints of this new format do not permit publication of genealogical information in any detail. However I am able and willing to supply information by e-mail on the Kentucky records I have on the following families and assorted connections:
Hammer, Stover, Carter, Sweeney, Hagan and Gillenwater.